"Fearless girl" statue for the first time 2017 year 7 March appeared in New York, Wall Street's famous bronze bull ago, inscription: "Women understand, As leaders of a, They make up the difference ". The sculpture was initiated by State Street Global Advisors to promote gender equality in corporations. Author, Uruguayan artist Kristen vizbalis vision of a strong girl, proud and brave woman symbol. The statue has become an award-winning, between them 18 Cannes Lions, Grand Effie და The Most Next Award. International recognition in parallel, "Fearless girl" divergence caused – Part of the society's "corporate feminism" idea meant, Another part of the – his childish appearance woman, As the leader of the image of decline. The statue now connects the world 4 a city.

women leaders and those of the corporate world in an interesting article published in the Harvard Business Review mood. According to studies,, Society often expects reciprocal treatment of women in organizations: One of the female leader of expectations, With its high competence, nature of the requester, On the other hand, – mildness. "Pretty hard to reach the mid-term evaluation, I have always been the object of two radical evaluations "- recalls HP- CEO Carly piorina, After a long search (because 1999 in business management level female executive not been common) In his famous picture by the photographer Annie leibovitsma.

contemporary works by famous photographer of the inner world of people, emotions, reflecting a kaleidoscope of thoughts – unique personality and character traits demonstrate.

leibovitsma portraits for the first time to work on the project "women" in the framework of 1999 started in: politics, business, culture and sports of the outstanding women taking. Initially, The idea of ​​segregation between women and men seemed risky, Moreover, the project looked like an ocean to shoot, If the beginning of the end of ambiguity. 2016 in, 17 After a year, Photographer UBS- partnership with us again this time, "women: New Portrait "Collection, where the camera Nobel Prize winner Malala iusupzai Writer, tennis sisters Serena Williams and vinus, Facebook CEO Sheryl Sandberg, artist Marina Abramovic and many other successful women reflected. leibovotsis said overconfidence easily detect seventeen years ago, women's portraits taken with a relatively-like comfort ourselves. Photos of people and spirit activities kontsetrirdeba. According to the author of the work on the project turned out to be infinite – woman.

2016 On exhibition galleries beyond the traditional format and the London-based uepingis hydraulic power station opened, where visitors personally had a meeting with artists, Opportunity to share your own stories and experiences.

childhood world a better and inspired by Jacqueline novogratsma successful career and left her in the microfinance business in Africa, quickly convinced, That is the most important opportunity and choice, The world's poor population will have access to banking services in the Entrepreneur projects. humanitarian aid resources are less effective in this case. the problem, Jacqueline created the Acumen Venture Fund and started funding entrepreneurs for healthcare, Education, Agriculture, energy;. novogratss believes that feature, which is funded by the Foundation unites people "moral imagination" ability – other people place on their performance, their problems and the opportunities to see and to establish a system, where everyone will be able to contribute their skills to the. 15 years, A Acumen- 110 million dollar investment, helped 102 social enterprise set up in Uganda, Kenya, Pakistan, India, Colombia, etc.. The companies, in turn,, 60,000 people employed, thereby Education, Health, Clean water and energy resources made available by 200 million people.

Despite the obstacles to success in the history of the Japanese artist and writer "of the contemporary world of Alice in Wonderland", iaioi linked kusamas. "The more I think of my, As the artist's role, more convinced, That the most important thing is to share love and peace. " – says artist.

His works are considered conceptual Artan Surrealism, minimalism, pop art elements. Their main characteristic ganmeorebadobaa. difficult childhood, mental problems such as hallucinations and did not prevent the artist to succeed in, On the contrary, a source of inspiration became. The hallucinations of his creativity Collie seen one of the main elements. iaiois collaboration with Louis Vuitton brand business 2012 On the creation of the collection.

Japanese artist famous art installation "Infinity Mirror Room" world hoax – watch the diversity, Diversity is a distracting, if ikargebi. Though small enough to follow the movement of mirrors to simulate a momentary lapse on, The colors no longer scatter, On the contrary, imagination helps to strengthen the. At this time make sure that, If the balance of maintaining the forward movement and if the universe is infinite, Our possibilities are endless in this world… 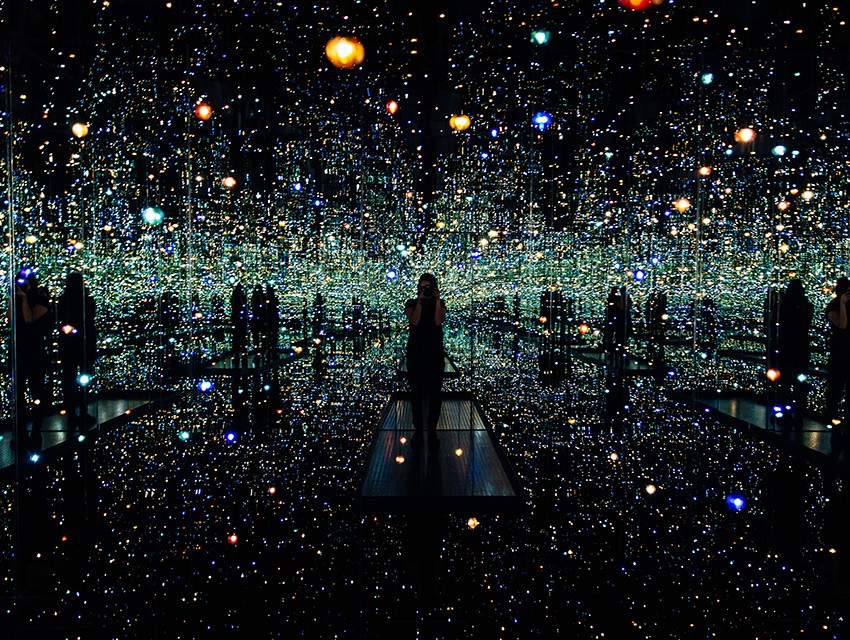