Georgia, As the middle of the sea corridor gate

About the Author: George Doborjginidze chairman of the Association of Logistics.

geographically in the middle of the corridor (Middle Corridor), which includes the Central Asia-Caucasus transport corridor, the Europe-Asia transport route of. 2017 According to the data, containers transported between Europe and Asia (YOUR) approximately 22 million. from here 15 million TEU transported from China to Europe and 7 million - from Europe to China. The freight volume (tones) 97 percent and the value of goods 70 percent is shipped by maritime transport. aviatransportit transported cargo volume 2 percent, As the value of cargo 28 percent.

The important factor to affect the future of the species and transportation routes in the selection, which means that, the high cost of goods for fast and reliable transportation routes will increase the share. So for example, 2011 Since 2017 under the Asia-Europe route, a ton of sea container freight average value 4,8 thousands of US dollars from 4,1 thousand US dollars decreased, while rail transport 5 thousands of US dollars from 10 increased to US $. Logistics Association of Georgia according to the study, Cargo capacity costs from (Opportunity cost) the, Asia-Europe rail transport in relation to the competitive, or containerized cargo, total cost of at least 300 thousand dollars.

Global trade trends show, the high cost of goods in total trade to grow sharply. This trend leads to the rapid transportation of competitive advantage, Since the cargo owners the opportunity cost of expensive inventory continues to grow.

despite, Recently, the middle of the corridor there is a certain Activity, It is related to China-Kazakhstan border in the direction of the container with activation blokmatareblebis, The corridor of China / Central Asia - European traffic is still marginal.

corridor in the middle of the main obstacles hindering the competitiveness of its high cost and the lack of reliability. for example, According to the Association of Logistics, Container rail transportation from Central Asia to Europe in the middle of the corridor 22 percent and expensive 50 percent long, than EAEC-'s route.

In the middle of the corridor of the main challenges of the Caspian Sea ferry service is expensive, Georgia's Black Sea ports of low efficiency and lack of reliability of the. for example, the last three years due to bad weather of ports per year on average 70 was closed for the day, Credibility of the corridor which led to the negative impact of hypertext links to other goods and facilitated transport corridors.

The high cost is due to the corridor infrastructure and border crossing procedural barriers, The corridor is also operational efficiency. unreliability as a major problem in the transportation price, as well as the unpredictability of the time.

Central Asia-Caspian transport corridor in order to improve the operation of major infrastructure measures have been taken in recent years. 2030 On the Caspian Sea ports cargo capacity 33 million tons to reach. Railway modernization of the railway capacity 48 million tons. Anaklia port will significantly improve the reliability of the middle of the corridor, also reduce the price of shipping. Cost reduction is one of the important factors in the marine container terminal, which, According to the consortium for the development of Anaklia, New technologies and container processing speed will be featured. This will increase the port's capacity and efficiency of berths, which will ultimately have a positive impact on the price of container processing, that the ports in the one of the highest in the region.

Georgia is the shortest sea link between Central Asia through the middle of the corridor, and hence the corridor is an important hub. its geographical advantages of the, Georgia can not only of regional logistics hub, but in the medium term the important transport route for Central Asia and in the long term China-Europe connecting corridor for alternative transit turn.

of transit and logistics potential important role in its economic development and integration of the global market for. It should be noted, the logistical infrastructure and the development of technology capable of, much more economic benefits from the added value of creating a transit cargo, who can, to move through Georgia.

To achieve this goal it is necessary to transport-logistic infrastructure development system, introduction of new technologies and the transport and logistics of international management practices. But in the middle of the corridor to improve competitiveness, it is important for the countries participating in the corridor targeted regional efforts, These unified logistics corridor to form a network. 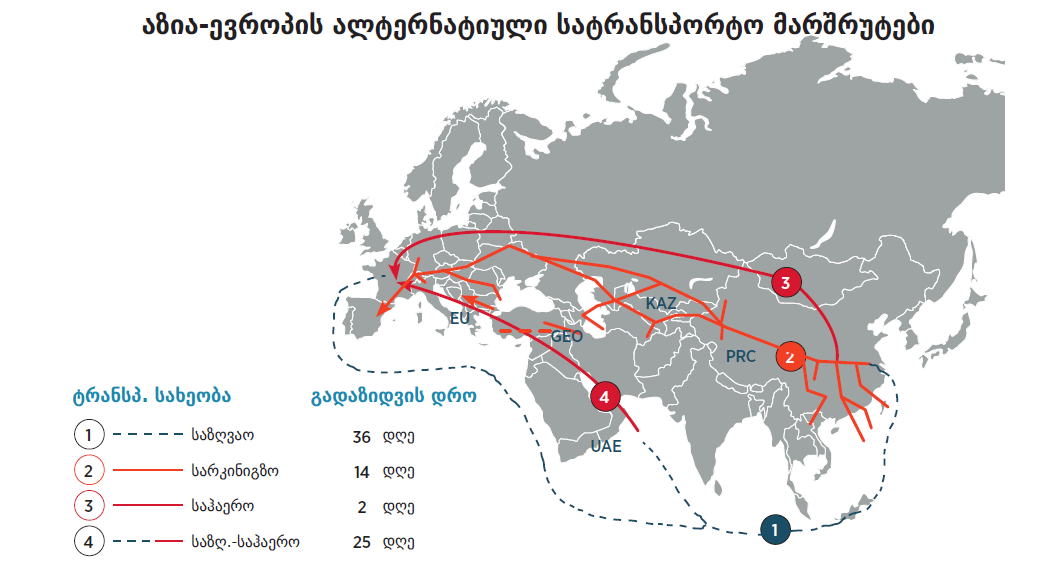 To, In the middle of the corridor to increase its competitiveness, First of all it is necessary to Corridor Maritime Union (Sea connectivity) Improve, which, think, five deep water port will contribute significantly to the. in case, If you have improved the efficiency of port operations and services have reduced tariffs, corridor will be difficult to compete with not only the northern route (EAEC), South East Asia but also the route to central Asia, Iran.

Like the Black Sea ports, Caspian Sea ports infrastructure needed to implement measures, It ports capacity and cost-efficiency will be directed. Also important to the Caspian Sea ferry and container services to improve, This can be achieved as tariffs, Also by reducing the transit time will be available.

intermodal service improvement of an effective mechanism in the middle of the corridor countries intermodal transport liberalization of markets, It will facilitate the transportation of the private operators of international involvement. This will allow the state railway company s, attract additional investments in intermodal transport infrastructure and most importantly, International know-how, which is necessary for improving the operational efficiency. It is also important, that the private operators will be given, independently determine their own tariff policy in order, that, Operational efficiency improvements in parallel, reduction of tariffs and the corridor to attract more cargo to be able to.

corridor not only the reliability of the infrastructure and the quality of service depends on, but the border crossing and trade-related barriers. There are still many barriers such, particularly in the Caspian Sea, As the shipping cost and time due to the unpredictability. Therefore it is necessary in the middle of the corridor between the governments of the countries should be further enhanced and in this way to deal with these barriers.

International practice will tell, the effective functioning of transport corridors for the necessary ports, railways, forwarders and logistics servisprovaiderebsa between strategic partnerships and alliances to develop. Today competitive transport corridors functioning, As a unified logistics network. In many cases, the competing companies to unite under one alliance to, to improve the competitiveness of the corridor and the corridor to attract additional cargo.

In the middle of the corridor between the players of this partnership will allow them to establish, reduce transportation barriers points, implement a common tariff policy, lower shipping costs and improve the reliability of the corridor.

The logistics industry in the high-tech sector, whose management requires advanced technologies and skilled human resources. expensive investments in infrastructure and technology can bring results, If the middle of the corridor countries have not been able to develop competencies. logistics capacity shortage is especially critical of the. The World Bank's Logistics Performance Index also testifies (LPI), according to which Georgia is the last place one.

transport and logistics necessary for the adequate development of human capital and international management practices, allowing us, full use of the potential of, As new technologies have the logistics.